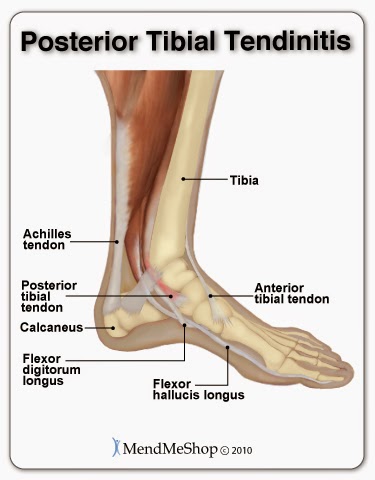 Posterior tibial tendonitis is a condition in which the tendon that connects the calf muscles to the foot becomes painful and inflamed. Symptoms of this type of tendonitis include pain and swelling on the inside of the affected foot or ankle, along with limited range of motion. Most cases are treated with rest, immobility, and other non-surgical methods, but surgery to repair the tendon or fuse bones at the midfoot may be used in more advanced cases in which the arch has fallen (a condition known as flat foot).

What is the Posterior Tibial Tendon?

The posterior tibial tendon runs along the instep, from the ankle to the bottom of the foot. It connects the calf muscle to the bones of the instep. This tendon works to turn the foot inward while walking and is also important in supporting the arch. Problems with this tendon, such as tendonitis, can lead to a loss of arch support in the foot.

The feet are constantly being used, and the tendons in the foot endure daily wear and tear. Tendons are made of collagen, and the individual strands of collagen that make up the tendon can wear down or break. This can occur due to an injury, with overuse, or as a result of the aging process — our tendons weaken as we get older.
Over time the tendon starts to become irritated, and eventually it can actually become inflamed. The cycle of inflammation and subsequent healing can lead to scarring. The scarred portion of the tendon can become thickened and form nodules. Sections of the tendon that have nodules are weak points, and are more susceptible to becoming inflamed and developing tendonitis. There is also a greater risk of rupture at the weakened points.
Tendonitis is also common after an injury, such as an ankle sprain. Athletes who play basketball, tennis, or soccer are at risk for posterior tibial tendonitis, either from ankle injury or from repetitive use.

Diagnosis of posterior tibial tendonitis requires a physical examination. A podiatrist, orthopedist, or other healthcare professional will look at the history of the symptoms occurring in the foot and ankle.
Healthcare professionals look for several signs in a patient that may point to posterior tibial tendonitis. One is swelling along the tendon, running along the inside of the foot to the ankle. Another is the presence of a flat foot — that is, a foot with a collapsed arch. The foot may also be at an unusual angle when the patient is standing — the heel may splay outward instead of being in line with the toes. When viewed from behind the heel, the foot may appear off center, with the toes clearly visible where they would normally be obstructed from view by a heel that is in the proper position.
A patient with posterior tibial tendonitis may have difficulty standing on tiptoe on the affected foot. In some cases there may be restricted mobility in the foot, which is apparent when trying to move the foot from side to side. The ankle may also display limited mobility when using the muscles in the ankle to bring the toes up toward the calf.
Imaging studies such as x-rays, magnetic resonance imaging (MRI), and ultrasound may also be used to help diagnose posterior tibial tendonitis. In some cases, these imaging studies may be ordered not only to confirm the diagnosis of posterior tibial tendonitis, but also to rule out the possibility of another condition,  such as arthritis. MRI in particular may show any inflammation present in the tendon.

Some methods of treatment for posterior tibial tendonitis begin at home, and other treatments are administered in a doctor’s office on an outpatient basis.
Cortisone injections are used to treat many types of inflammation, but they are not typically used to treat tendonitis. An injection into the tendon carries a risk of rupture, and is therefore not recommended.

Posterior tibial tendonitis that has not responded to non-surgical methods might be considered for surgical correction. The types of surgery used to treat this condition include lengthening the Achilles tendon, tenosynovectomy, tendon transfer, osteotomy, and fusion.
Tenosynovectomy: During this surgery, the inflamed outer portions of the tendon may be removed (debrided). It may be successful in cases in which the arch has not collapsed and the pain is caused by thickening of the tendon. This surgery involves making a small incision in the foot in order to remove the inflamed material. The tendonitis may still recur after this type of surgery, however.
Lengthening the Achilles tendon: In this surgery, the muscle in the calf is lengthened in order to improve range of movement in the foot. After this surgery, patients may find some “pushing off” movements with the foot to be more difficult.
Tendon transfer: The tendon is repaired in this surgery by taking a tendon from another part of the foot and either replacing or augmenting the posterior tibial tendon. The tendon that is frequently used in this procedure is the flexor digitorum longus, which is responsible for moving the little toes. If the posterior tibial tendon is left in place, degraded portions of the tendon may be removed before the new tendon is grafted to it. Although it may help resolve the tendonitis, a complete return to athletic activities may not be possible after this type of surgery. This surgery is performed in cases where tenosynovectomy has not been successful, and may be done in conjunction with osteotomy or fusion.
Osteotomy: The heel bones are cut, and bone may be grafted to the outside of the foot in order to create an arch and correct flat foot. In some cases, the bones of the midfoot may also be fused together.
Fusion: In cases in which other surgeries have been unsuccessful, or if a flat foot has caused a deformity, the bones in the back of the feet may be fused together. Fusion begins with the removal of the cartilage between the joints, which normally serves to keep the bones separate. With the cartilage gone, the bones are held together with pins or screws until they grow together. After this surgery, side-to-side motion in the foot may be lost.


Any surgery risks potential complications, such as infection. Some types of surgery to correct posterior tibial tendonitis may not be successful — and more surgery may be needed in such cases — but most patients have a successful outcome and the tendonitis pain is resolved. Rehabilitation is often needed after surgery and may continue for as long as four months. Athletes who expect to return to their sport may require as long as six months to heal before that is possible.
http://www.footvitals.com/tendons/posterior-tibial-tendonitis.html

To Your Health,
Dr. Donald Pelto